Lambeth Labour is proud to back Lambeth Citizens’ key commitments 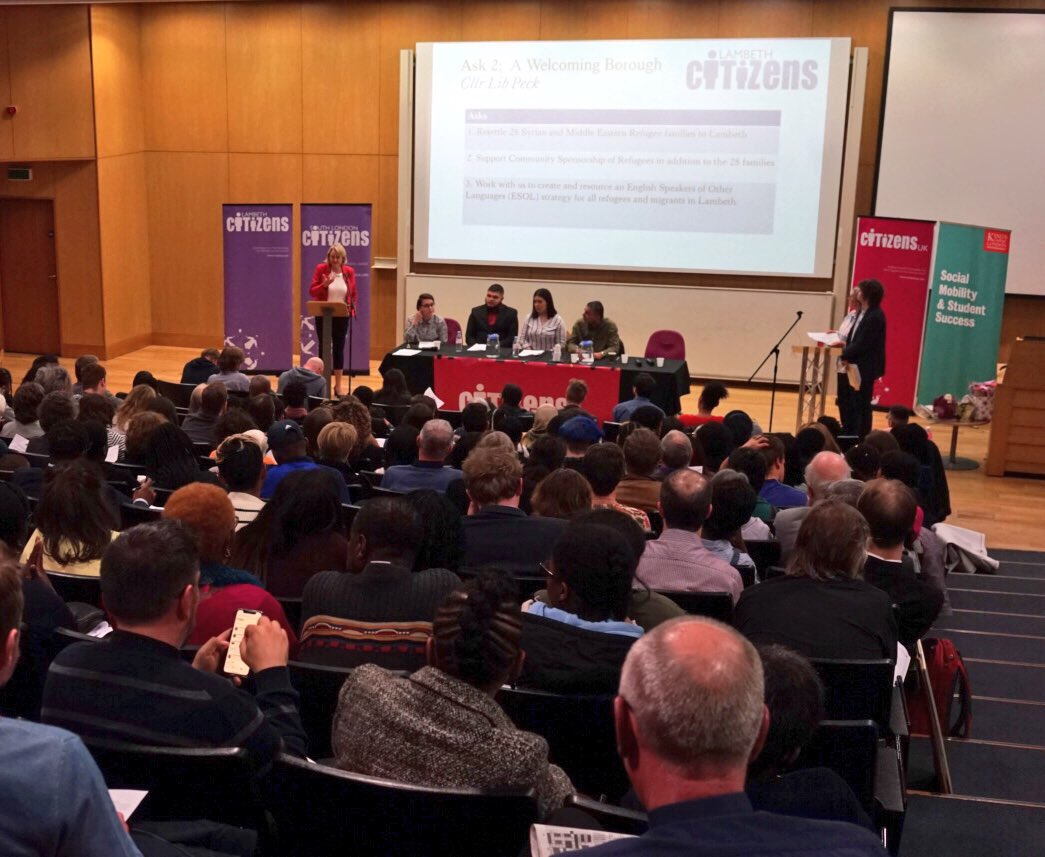 I was very pleased to attend the Lambeth Citizens Local Election Assembly 2018 yesterday which was as ever well organised and inspiring. As I expressed at the event, Lambeth Labour is proud to back the community group’s key commitments for ‘An Accountable Lambeth’, ‘A Welcoming Lambeth, ‘An Affordable Lambeth’ and ‘A Fair Lambeth’.

Lambeth Citizens asks for a mutual relationship with the council to keep Lambeth accountable. I’m proud that under Labour, Lambeth has a strong track record of working with Lambeth Citizens on issues including financial resilience strategy, the London Living Wage and most recently welcoming refugees to Lambeth.

I was honoured to be recognised and thanked at the event for our work with Lambeth Citizens on the Living Wage and resettling refugees the past 4 years.

Lambeth citizens is working for ‘A Welcoming Lambeth’. Thanks to Lambeth Citizens partnership with the council, our borough has shown national leadership by taking in 23 refugee families, finding homes and safe shelter for over 100 people. In our manifesto, we reaffirm our commitment welcoming and supporting more refugees to the borough by working with community group such as Lambeth citizens.

We also discussed the appalling treatment of the Windrush generation who years after being welcomed by the UK government are now being denied jobs, healthcare and have been subject to deportation. My colleague Cllr Sonia Winifred has been supporting people affected for many months and with Chuka Umunna MP and Helen Hayes MP, I wrote to the Prime Minster demanding action.

While we continue to fight for the rights of the Windrush generation, it’s also important to celebrate their huge contributions to Lambeth and the UK. This year marks the 70th anniversary of the Empire Windrush. Lambeth Council supported by The Voice is working with many groups including the Young Lambeth Co-operative and Black Cultural Archives to coordinate a vibrant event program to celebrate the Windrush generation and other migrants who have contributed so much to our communities.

To properly welcome the people who come from all over the world to make their home in our borough, Lambeth citizens ask for a better resourced ESOL (English for Speakers of Other Languages) strategy. Government cuts to English-language teaching make it harder for people to make the most of everything our borough has to offer. In our manifesto we’ve pledged to improving ESOL take up using our children’s centres and schools, and are committed to working with Lambeth Citizens to improve this service.

Lambeth Citizens also ask for ‘An Affordable Lambeth’ which is a huge priority for Lambeth Labour. We are committed to affordable housing. In our planning policy, Lambeth priorities social rent. We aim for 70% of affordable homes to be for social rent and the remaining 30% to be affordable home ownership or intermediate rent for people on middle incomes. We introduced a developers tax which has raised nearly £20 million to invest in local community infrastructure and community projects. In our manifesto, we pledge to increase this developers tax so more money goes to benefit the local community across the borough. Being tough with developers is working. 43% of new homes built in the borough in 2016-17 were affordable housing -; beating our own planning target of 40% affordable homes. Over the next four years we’ll build hundreds more homes for council rent on council-owned land across the borough and maximise the number of genuinely affordable homes delivered from developments.

Yet, we know that all this is not enough to solve the housing crisis. On a national level, the government needs to address affordability. A Labour government would redefine affordable housing -; doing away with the Conservatives’ disingenuous “affordable rent” at up to 80% of market rates and replacing it with genuinely affordable homes to rent and buy linked to average incomes.

On a local level, the council cannot solve the housing crisis on its own. For the first time we’ve consulted on recognising innovative approaches like Community Land Trusts in our planning policy which may be part of the solution. Lambeth Labour is committed to working with groups like Brixton Green. And in our manifesto, we commit to working with local groups like South London Citizens to bring forward Lambeth’s first Community Land Trust.

Under Labour, Lambeth is committed to clamping down on rogue landlords and those who put tenants at risk with dangerous overcrowding or substandard accommodation. We pledge to expand our landlord licensing scheme to double the number of HMOs covered. We will name, shame & prosecute rogue landlords who fail to provide decent homes, doubling the number of inspections of private rented homes.

Finally, Lambeth Citizens asks for ‘A Fair Lambeth’. Like most people who work in politics, the reason I got into politics is to tackle inequality and increase opportunities for those who need them most. Growing up in Lambeth can give young people the best start in life, with the independent Social Mobility Commission recently recognising Lambeth as being in the top 5% of areas in the country for young people’s life chances. Under Labour Lambeth has protected our 23 fantastic children centres, ensured that 96% of our schools judged good or outstanding by Ofsted and established a Youth Mayor. I’m proud of our work with the Somali community in Lambeth to increase attainment which has been hugely successful with many of the young people we worked with now at university.

Yet, we know that all this is not enough to tackle ingrained inequalities. Under Labour, Lambeth established its own independent Equality Commission as a blueprint to tackle inequalities in our borough. We pledge to enact its recommendations including improving schools achievement of Black Caribbean communities. We also need to support groups like Parent Power to ensure that we create a borough where young people thrive. In our manifesto we also commit to supporting Lambeth Citizens in their campaign to make securing UK Citizenship easier and more affordable, especially for under 18s -; it is outrageous that the Government charges £973 for under 18s to become citizens.

Lambeth Labour is proud to support Lambeth Citizens key commitments in this election campaign and look forward to continue our important work with them if re-elected in May.